On December 7th, the brothers attending the Annual/Stated meeting of St. John’s Lodge No. 1 voted to permanently name the December toy drive in honor of brother Joseph Minai who suddenly and unexpectedly passed from labor to refreshment several moths ago.  Joe, as most every brother in Saint John’s knows, was passionate about the annual  collection for the Portsmouth Toy Bank.  He put his all into making sure a large number of toys were available for distribution to children of the greater Portsmouth area during the Christmas Season.  Our annual joint effort with our sister  Lodge, St. Andrews No. 56,  will from this point on be known as the Joseph Michael Minai Annual Toy Drive.

Joe’s efforts last year along with those of the brothers of St. John’s  and St. Andrews Lodges put over $1,100 worth of new toys “under the tree for area children”.  This year the brothers of both lodges along with members of the Scottish Rite raised donations to the $1,500* mark – a fitting tribute to “Brother Joe”.

*(at the time this post was published, donations were still coming in). 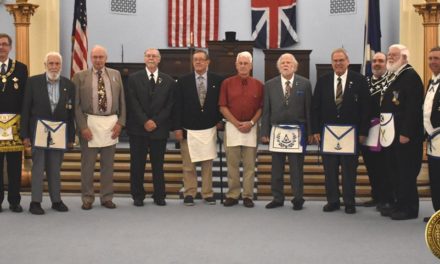